Love Connection: Romance in the Land of the Rising Sun
Availability: In Stock

Love Connection: Romance in the Land of the Rising Sun

Love Connection is unlike any love story ever told. The “lovers” don’t even meet until the final pages of the book. Though they live in Japan, their “romantic adventure” spans three continents. What eventually happens to them is truly mind-blowing and based on actual events.

Love Connection is set in contemporary Japan and is the story of Kumiko and Takashi, two mature individuals still grieving the loss of their spouses. They don’t know one another, in fact, do not even meet until the final scene of the novel. Both Kumiko and Takashi end up visiting Africa, then finally meet back in Japan. This totally unique tale is based on true stories. This is NOT A ROMANCE NOVEL. It’s about redefining self, rediscovering relationships and life, the ruthlessness and sociopathy of some foreign criminal elements, and the innocence, trusting nature of Japanese people.

John Rachel has a B. A. in Philosophy, has traveled extensively, is a songwriter, music producer, novelist, and an evolutionary humanist. Since 2008, when he first embarked on his career as a novelist, he has had nine fiction and three non-fiction books published. These range from four satires and a coming-of-age trilogy, to a political drama and now a crime thriller. The three non-fiction works were also political, his attempt to address the crisis of democracy and pandemic corruption in the governing institutions of America.With the publication of Love Connection, his recent pictorial memoir, Live From Japan!, and the spoof on the self-help crazes of the 80s and 90s, Sex, Lies & Coffee Beans, he has three more novels in the pipeline: Mary K, the story of a cosmetics salesgirl with an IQ of 230, the surreal final book of his End-of-the-World Trilogy; and finally, The Last Giraffe, an anthropological drama and love story involving both the worship and devouring of giraffes. It deliciously unfolds in 19th Century sub-Saharan Africa.The author’s last permanent residence in America was Portland, Oregon where he had a state-of-the-art ProTools recording studio, music production house, a radio promotion and music publishing company. He recorded and produced several artists in the Pacific Northwest, releasing and promoting their music on radio across America and overseas.John Rachel now lives in a quiet, traditional, rural Japanese community, where he sets his non-existent watch by the thrice-daily ringing of temple bells, at a local Shinto shrine.

Be the first to review “Love Connection: Romance in the Land of the Rising Sun” Cancel reply 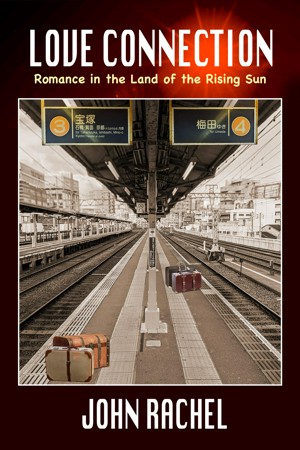