An Abigail Dumpling Adventure: A Stone’s Throw
Availability: In Stock

UGH! Bugs! Zombie Socks! Oh, my! They are everywhere and will stop at nothing to gain control of the magical realm and the world. Abigail Dumpling must contend with these Evil creatures to return the Magical Lith Stones to the Cross of Valor. But others are also searching for the Lith Stones. Abigail must outsmart them all and save the world. That shouldn’t be too terribly hard to do. Should it?

In the second book of the series, Abigail Dumpling, a part-time kindergarten teacher and caretaker of the magical Inspire Apple Orchard, finds herself back in the orchard in search of the remaining Magical Lith Stones. If she can find them and place them in the Cross of Valor, she can ensure the orchard is forever protected from Evil. It is a task easier said than done, as the son of a former caretaker returns to reclaim the job, he feels is rightfully his. Abigail’s quest is made more difficult by Agnes the Evil, who wishes to obtain the magical stones in order to make Evil reign forever in the orchard. Various creatures of the orchard also hinder Abigail with their internal struggles and personal agendas. Will Abigail manage to find a way around everyone and everything to complete her quest? Time will tell.

J.A. Sprouls lives in the beautiful and rather flat Rollin’ Plains of West Texas. As a former antique dealer whose business tanked along with the rest of the country’s economy she had to go out and get a real job. Writing, for her, has become a way to wind down after a long days work and escape reality for just a short while. ‘My Grandfather Is One Heck Of A Mummy’ is the first in what will hopefully be a successful cozy mystery series. The second novel in the series, ‘Mace Of Spades,’ with ‘Cowabunga Dead’ as the third in the series. Another series that she has written is the Cryptozoology Series with two current books: ‘Kamikaze Pigs’ and ‘Don Coyote.’ She has even tried writing a youth novel titled: ‘An Accidental Pirate, The Adventures of Captain Pigtail McQueue.’ She has also written two non-series books: ‘A Vision Touch’ and ‘Death Drives a Chevy.’ She is currently working on her next novel and should soon be finished.She enjoys writing cozy mysteries with a humorous touch and hopes her readers enjoy reading them as much as she has enjoyed writing them.

Be the first to review “An Abigail Dumpling Adventure: A Stone’s Throw” Cancel reply 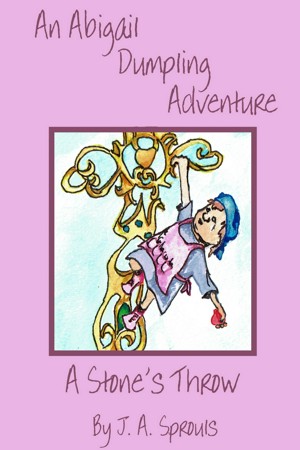